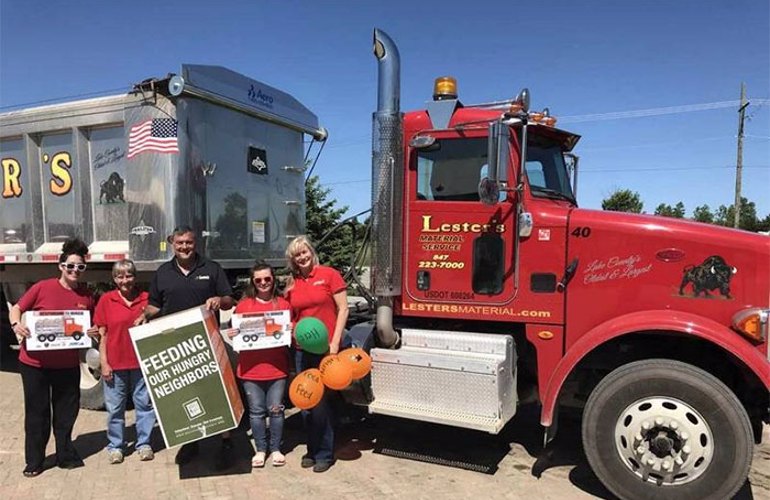 Big equipment from dozens of agencies was on display Tuesday at the Lake County Fairgrounds in Grayslake for a Touch-a-Truck event to collect food for those in need and promote the role of public works as first responders.

Organized by the American Public Works Association Lake Branch in partnership with the Northern Illinois Food Bank and the Lake County sheriff's office, the lineup of about 40 vehicles capped a countywide campaign that began about six weeks ago.

The display was a big hit, with attendees strolling the blacktop among a variety of vehicles including front end loaders, a winged-blade snowplow, Vector vacuum trucks and "Showtime," a huge heavy rescue crane, all on the eve of the start of the Lake County Fair.

Visitors included Renee Wagner and her twins, Aiden and Preston, 5, and daughter, Nora.

"We saw the Facebook link and Preston loves trucks. We've been here since it opened. Lots to see," Wagner said more than an hour into the event.

Anslee Howard said she got a text from a friend Tuesday morning and packed up her 2-year old, Barrett, and supplies for a trip to the fairgrounds from their home in Gurnee.

"He's all about the trucks and tractors," she said.


Public works agencies want to spread the word of their role as first responders in emergency and other situations.

Nick Keller III, community outreach chair for the Lake County branch of the public works group who was tasked with raising the profile of public works departments and workers, originated and pursued the idea to link that effort with a good cause.

"We brainstormed a few events, I'm thinking a pancake breakfast, a clean up the river (when) Nick said, 'I got this,'" said Dan Buckelmeyer, president of the Lake branch of the organization. About 26 townships, communities and other agencies and companies participated.

Touch-a-Truck was free, but visitors were asked to bring nonperishable items. The meat of that part of the effort was from collection boxes in 41 locations throughout the county.

"I am completely overwhelmed with the turnout," said Andrew Palmer, development officer or the food bank, which supplies 800 food pantries. "We couldn't do it without community efforts like this."

Palmer and Keller said a conservative estimate showed about 4,000 pounds of food had been collected, not including what was brought Tuesday. The partners hope to expand to 100 collection locations next year.

"We wanted to do something big this year and it turned out better than we hoped," Buckelmeyer said. "Next year it will be bigger."

How to Increase Your ROI Through